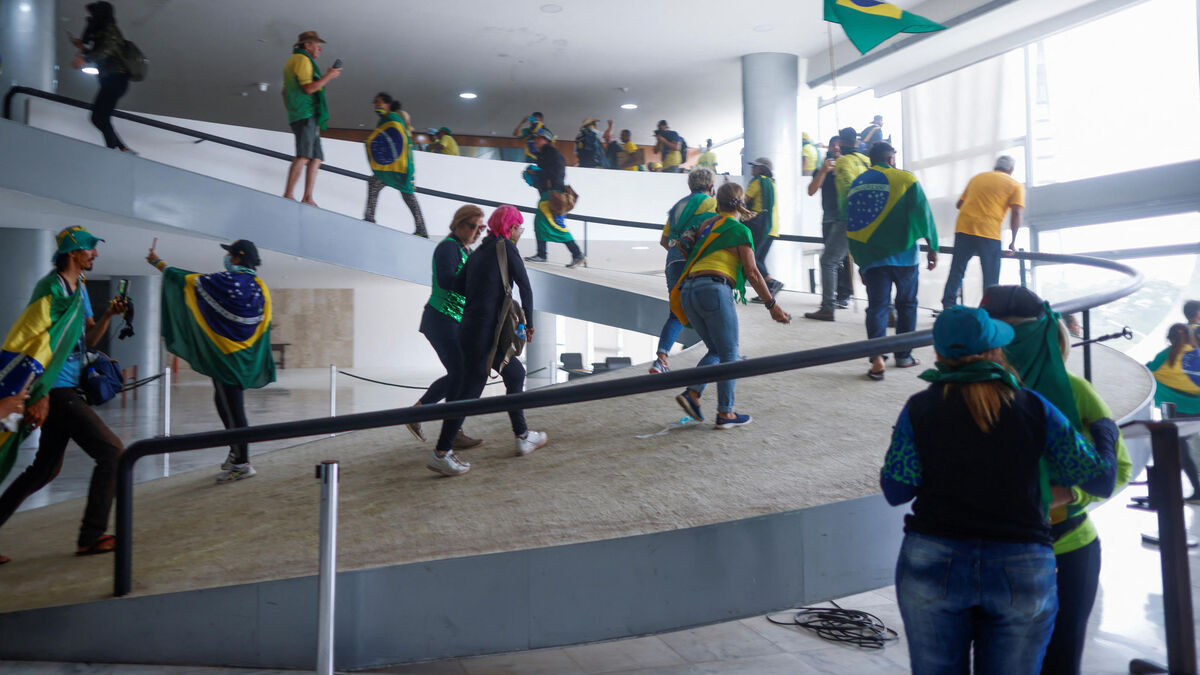 The area around Congress was cordoned off by authorities, but Bolsonaros refuse to accept Lula’s election They managed to break through the security rings and several dozen of them managed to occupy the curved roof of this building with modern architecture. According to pictures posted on social media, the invasion caused extensive damage.

These impressive images are reminiscent Capital Invasion in the United States, show a veritable human tide flowing towards Congress. According to the videos, pro-Bolsonaro activists broke windows to gain access to the interior of parliament, but also to the interior of the Planaldo presidential palace.

Rush: Invaders broke the windows of the congressional closet and stormed into the House of Representatives. Militants are already in the green room and annexes of the building. Planaldo Palace was also raided. President Lula was not on site. pic.twitter.com/lP91pLqTuf

🚨 Supporters of Bolsonaro, who do not accept the 2022 election result, invade the Palacio do Planaldo and cause destruction. pic.twitter.com/m4ZiV6ddGH

Brazilian President Luiz Inácio Lula da Silva described the demonstrators as “fascist saboteurs” hours later and ordered a “federal intervention” on the police to control security in the capital. “We will find them all and they will all be punished,” Lula said of the Bolsonaros responsible for robbing Lula, who was sworn in as president a week ago.

What is the extent of the damage?

Congress brings the House of Representatives and the Senate into one building. The Federal Supreme Court is also nearby. The highest case of the Brazilian judiciary. Videos posted on social media showed protesters destroying the campus.

The police, completely overwhelmed, tried to chase them away but to no avail. They can be seen knocking off their horses by the demonstrators and then they are forced to retreat and extricate themselves from the demonstrators. The damage seems to be considerable in these buildings which are full of treasures of modern architecture and works of art. Demonstrators attack furniture but also the walls and roof of the Federal Supreme Court.

Deputy Andre Janones called the protesters “terrorists”, accusing them on Twitter of stealing “computers, tables, chairs and even doors”.

A photojournalist from the editorial board of Metropolis It claims to have been violently attacked by protesters. She found herself surrounded by a dozen people. “They were shouting and cursing me around. I tried to get out of there but they punched me in the stomach and took my equipment when they kicked me,” he explains from his media base.

More than a hundred people were arrested

Faced with the extent of the Bolsonaros’ mobilization, the government announced the dispatch of reinforcements. “This ridiculous attempt to impose will will not succeed. The government of the Federal District (of Brasilia) will send reinforcements and the forces we have,” Justice and Public Security Minister Flavio Tino said on Twitter.

On Saturday, Flavio Dino authorized the deployment of agents of the National Guard, a special police force sometimes sent to various states in case of threats to law and order. Lula, 77, was not in Brasilia on Sunday: he went to Arráguara, in the state of São Paulo (southeast). Destroyed by floods At the end of the year.

The police and security of the Federal Supreme Court finally regained control of the building, beginning the evacuation of the Brazilian Congress. At least 150 supporters of far-right former president Jair Bolsonaro were arrested at the scene, several media reported. Images from the CNN Brazil channel showed Bolsonaros dressed in yellow and green arriving in single file, hands behind their backs, on the archway of Planaldo’s presidential palace, surrounded by police.

🚨#breaking: Mass arrests of pro-Bolsonaro protesters at the presidential palace

📌#Brasilia | #Brazil
⁰Currently, a large contingent of riot police has surrounded pro-Bolsonaro protesters as many protesters are now being arrested en masse. pic.twitter.com/DmZOPL6pxO

What are the motivations of Bolsonaro supporters?

Since Lula was elected against Bolsonaro at the end of October, the former president’s supporters have protested the rigged elections. They called for military intervention to prevent Lula from returning to power for a third term, after ruling from 2003 to 2010. “After this fraudulent election, we must restore order,” he told AFP journalist Sarah Lima. The 27-year-old is a pro-Bolsonaro engineer from Goenácia, 300 km from Brasilia.

After the defeat of Jair Bolsonaro, His supporters staged a road blockade In at least 11 states across the country. They were gradually dispersed by the police, who would stop vehicles and burn tires in the middle of the road to stop traffic. Bolsonaro called for the lifting of the blockade of the roads, but indicated Supporting “legitimate struggles”.. He encouraged his supporters to join the demonstrators gathered in front of the military buildings.

Jair Bolsonaro He left Brazil before his mandate ended To reach America. He never congratulated Lula on his election and ignored his investiture.