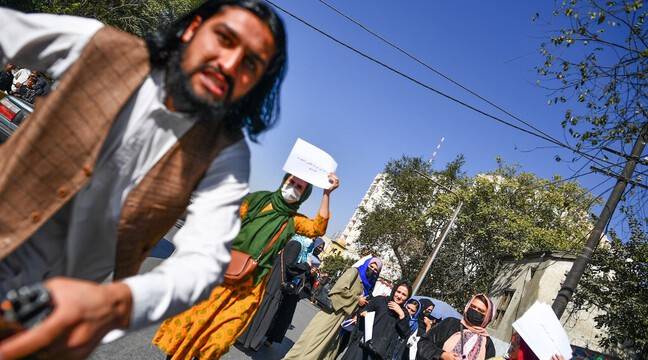 Many journalists were beaten to prevent them from being covered by the Taliban Demonstration of women, In Kabul this Thursday.

The group of about twenty women was able to march for more than an hour and a half to the center of Kabul to defend their right to study and work without being arrested or attacked by the Taliban. Demonstrators wearing colorful scarves, coats and pants chanted “unemployment, poverty, hunger” and “we want to work”.

Demonstrators, sometimes designed very closely by Taliban security forces, also stamped small markings on A4 paper in the middle of traffic, with the words “We have no right to work.” The last women’s demonstration, on September 30, was disbanded by Taliban forces within minutes.

The media, on the other hand, prevented the procession from approaching, photographing or filming, and was violently chased away by Taliban militants there. Among them, a journalist was shot but was later expelled from the procession and intimidated by a Taliban man there. Some are armed with AK-47 or M-16 rifles.

“The Taliban do not respect anything”

Women They were not physically assaulted during the march, but on several occasions the Taliban tried to intercept them, including verbally. They eventually decided to disperse, and no one was arrested, an organizer said.

“This is the situation: the Taliban do not respect anything, journalists, locals or foreigners, not women,” said Zahra Mohammad, one of the organizers: “My message to all girls in this country is, ‘Do not be afraid of the Taliban. Even if your family does not let you leave the house, do not be afraid. Come out, make sacrifices, fight for your rights, you must make a difference. The next generation ”.