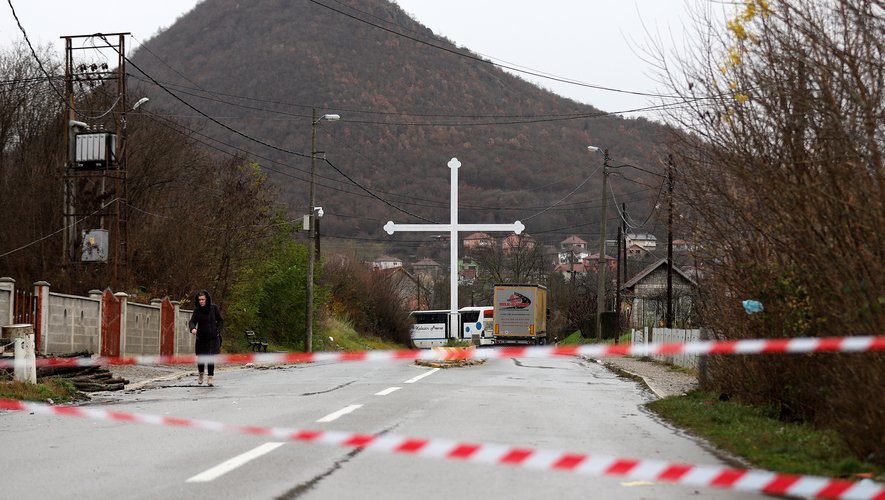 Tensions continue to rise between Serbia and Kosovo, which decided on Wednesday to close the main border crossing between the two countries in response to blockades on the Serbian side by demonstrators supporting the Serbian minority in the north.

The Serb minority erected new barricades in the northern Kosovo town of Mitrovica on Tuesday, hours after Serbia said it was putting its army on high alert. The Kosovo Ministry of Foreign Affairs announced on its Facebook page that the Merdere crossing, which is very important for road cargo traffic, has been closed since midnight. “If you have already entered Serbia, you must use other border crossings (…) or go through North Macedonia”, he added.

Since December 10, when Serbs in northern Kosovo, backed by Belgrade, erected numerous barricades in and around Mitrovica, two border crossings have been closed and three remain open. The Serbian minority in the north particularly demanded the release of a former Serb policeman accused of assaulting police officers on duty during earlier demonstrations. His release was announced on Wednesday. Dejan Pantić will be released and placed under house arrest, according to a spokesman for the court in Pristina.

The Kosovar interior minister, Xhelal Sveçla, has accused Serbia of trying to destabilize Kosovo with the support of Russia by encouraging the resistance movement. For its part, the Kremlin said Wednesday it supported Serbia’s efforts to protect the Serbian minority in northern Kosovo, but denied Pristina’s accusations that Russia was stoking tensions in the Balkans. “Serbia is a sovereign country, it is absolutely wrong to look for destructive Russian influence here”Kremlin spokesman Dmitry Peskov said.

read more:
Barricades in Mitrovica: Why tensions are rising between Serbia and Kosovo

NATO’s mission in Kosovo, the Kosovo Force (KFOR), on Wednesday asked both sides to avoid escalating tensions and seek a negotiated solution. “It is of the utmost importance that all parties concerned avoid any rhetoric or action that could create tension and escalate the situation”Major General Angelo Michele Ristuccia said in a statement. “negotiated settlement”he added.

About 50,000 Serbs live in the northern part of Kosovo and refuse to recognize the Pristina government or the Kosovar government. They regard Belgrade as their capital. Friction between the two communities in recent weeks stems from the desire of authorities in Pristina to demand the return of Serbian license plates dating back to the 1998-1999 Kosovo war that led to independence.