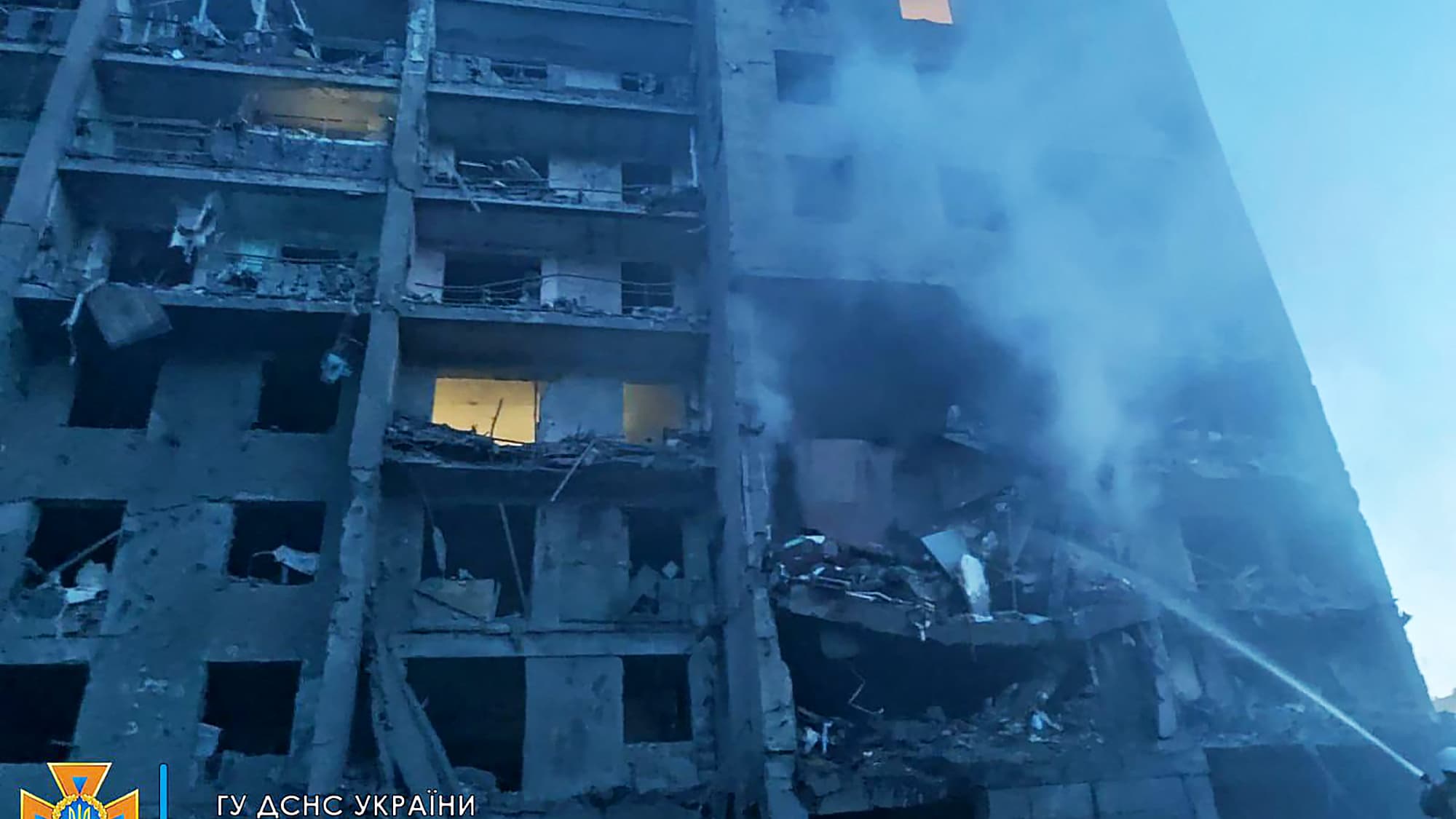 The end of the French presidency of the EU: a decree “has changed historically for Ukraine and all of Europe,” says Zelensky

Ukrainian President Volodymyr Zelensky on Friday congratulated Emmanuel Macron on his “success” in the French presidency of the European Union, which ends this Friday. It has “become history for Ukraine and all of Europe,” he writes, adding that together “we are strengthening Europe.”

“Europe will do everything in its power to help Ukraine win this war,” the head of the European Commission declared in a speech to the Ukrainian parliament this Friday, adding, “We will not rest until you win.” He also praised the “courageous” response of the Ukrainian people.

During a meeting with his Belarusian counterpart on Friday, Russian Foreign Minister Sergei Lavrov pledged “we will defend unconditional respect for international law.” A strange statement given that Russia has been accused for months of violating international law in its invasion of Ukraine.

“We will maintain this position with our Belarusian partners and our many like-minded partners who share these attitudes,” he said.

A telephone exchange between Macron and Putin, four days before the start of the war in Ukraine

On February 20, 2022, four days before the start of the war in Ukraine, Emmanuel Macron spoke by phone with Vladimir Putin. They spoke specifically about the situation in Donbas, where pro-Russian separatists have been fighting the Ukrainian government since 2014.

“Texts of laws are proposed by separatist groups, not by democratically elected officials,” Emmanuel Macron introduced to his Russian counterpart. “This is not a democratically elected government, they came to power through a bloody coup,” responded Vladimir Putin, who condemned the lack of dialogue on Q’s part.

The exchange ends with an agreement to meet with US President Joe Biden before Vladimir Putin cuts off. “To hide anything from you, I wanted to play ice hockey, because here I am talking to you from the gym,” he tells Emmanuel Macron.

18 killed in Russian attack in Odessa

The number of strikes in Odessa increased further on Friday morning. “At least 18 people died” in a Russian bombardment of a Ukrainian city, Ukraine’s Defense Ministry announced. The previous count was 17 dead.

Giorgi Kubarashvili was a soldier of the Azov Regiment. Hit by two bullets in the abdomen, he had to be evacuated from the Azovstal factory in Mariupol, where he was stationed when the Russians captured the area. “We were picked up at 4am and it was difficult to get to the landing area because even at night Russian planes were flying and bombing Azovstal,” he told BFMTV.

“It took us more than an hour to cover 2 km, we had to hide, we had to take shelter very quickly, it was very dangerous”, he recalled. At the take-off area, the soldiers there exchanged gunfire with the Russians because “the helicopter had to be secured to pick up and evacuate wounded soldiers”.

Departed under bombardment and gunfire. “This evacuation was complete madness. I have lived through many wars, many operations, but this kind of madness was the first time,” explains the soldier.

EU calls on Ukraine to speed up anti-corruption reforms

Many reforms are necessary to integrate the European Union. Ukraine, the official candidate, must speed up reforms, particularly on anti-corruption, European Commission President Ursula van der Leyen said on Friday. He praised the reforms already undertaken and institutions building an “anti-corruption engine”, but said “these institutions now need operational mechanisms and the right people in responsible positions”.

“The road to Ukraine is long, but Europe will be with you every step of the way,” he said, “for every reform, as long as it takes.”

See also  In Belgium, school children are just a week ahead of the Christmas holidays

Ukrainian refugees at a Hindu temple on a Northern Irish island

In the middle of the calm waters of Lake Ern in Northern Ireland, the island of Inish Rath houses the temple of the Hare Krishna community, which has become a sanctuary for Ukrainian worshipers who fled the martyr city of Mariupol after the Russian invasion. They are members of the International Society for Krishna Consciousness (ISKCON) in Ukraine.

“Believers, the attention of people living nearby, the atmosphere of the temple … provides spiritual protection,” said Ruskin Khabibulin, a member of the movement, a refugee with his wife and 14-year-old son. ‘Island.

This spiritual movement is a branch of Hinduism. Founded in the 1960s, it quickly spread to Eastern Europe after the fall of the Soviet Union and has over a million members worldwide.

The death toll in Odessa has risen to 17

At least 17 people were killed in attacks on buildings in southern Ukraine’s Odesa region, kyiv reported. The previous count was 14 dead. According to a recent report by the Ukrainian emergency services, a missile launched by a “strategic aircraft” from the Black Sea “killed 14 people and injured 30, including three children”.

Another missile fired by the same plane hit two other buildings nearby, killing “three people, including a child,” rescuers added. Fire rescue operations are ongoing.

At least fourteen people were killed in a missile attack on a building in southern Ukraine’s Odesa region by a “strategic aircraft” fired from Kiev’s Black Sea as Ukraine’s military retook a strategic island from the Russians. To control the sea lanes.

Ukraine has begun exporting electricity to the EU via Romania in a “significant” way, President Volodymyr Dzhegansky announced Thursday evening.

“An important step has been taken in our rapprochement with the European Union,” Ukraine’s president said on Thursday, after its EU candidacy was approved by twenty-seven last week.

kyiv “started to significantly export electricity to the EU region, to Romania”, he said in a video address, adding that “this is only a first step”.

At least 10 people were killed in a missile attack in the Odesa region of southern Ukraine overnight Thursday into Friday, a senior Ukrainian official said.

Welcome to this live stream dedicated to following the war in Ukraine.